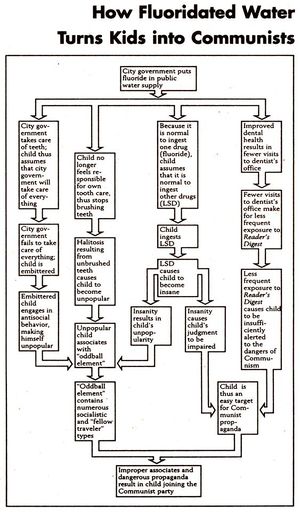 Things rational people don't worry about include: accidentally turning their kids into communists.

There is a widespread belief on the Right that communism is essentially evil.

This belief is probably based on either of two things:

"Communism" actually refers to "a socioeconomic system structured upon common ownership of the means of production and characterized by the absence of social classes, money, and the state." [W]

The Soviet Union -- officially, the Union of Soviet Socialist Republics -- was no more "socialist" than it was a "republic"; those two words were used to disguise its true nature, must as today's Right uses words like "freedom" and "liberty" to disguise (and gain support for) oppressive policies. Similarly, East Germany -- the German Democratic Republic -- was hardly a democracy (or a republic).

The "communism" of Soviet Russia and East Germany is more accurately described as "Leninism" (commonly referred to as Marxism-Leninism), Lenin having more or less betrayed the ideals of Karl Marx and his fellow travellers.