From CWRE
< Transnegation Roundup
Jump to navigation Jump to search

Parliament is Listening to Our BS

To which I say:

(Interesting how all the timestamps are the same; wonder what that means. Using TweetDeck?)

Star Trek is too PC, part one million

But What About The Children

I came across this very in-depth article about the sexist history of bathroom segregation, which specifically demolishes (yet again) Gender Critical arguments against trans women being allowed to use women's bathrooms:

...this notion of a predatory cross-dressing man is complete fiction. In reality, if you look at the numbers: it is trans people who are at the greatest risk of being attacked in public restrooms.

This is of course only what we've been saying for quite some time now.

That said, I've been frustrated by how difficult it can be to find stats on violence by trans women.

I search for "sexual abuse by women" and find plenty of information about that still relatively-small slice of the assault-pie: Assault/by women

...but as soon as I add "trans" into the search, I only get results about abuse *of* trans women.

CLEARLY THIS IS THE POSTMODERN WOKE PC TA CONSPIRACY SILENCING THE TRUTH!!

...or maybe it just means that trans women are much more likely to be assaultees than assaulters? 🤔

...both sides of this debate claim that they’re on the side of safety. One side argues that trans people should be safe in the bathroom [of] their gender identity, while the other side [cites the risk of attack] in the bathroom by cross-dressing men.

So: in order to factually address this question, we need to look at the relative danger of cis women/girls in women's rooms from two possible sources:

(a) other cis women
(b) trans women

For one thing, *everyone* would be safer in unisex bathrooms with a more open design for communal activities (sinks, mirrors) and better privacy for the individual toilets (floor-to-ceiling stalls which can't be peeked into).

More relevantly, though, sex-separated bathrooms were a sexist institution from the very beginning:

as [indoor restrooms] moved into the public realm, they entered a world that was at the time shaped by a very popular idea called the 🌺'separate spheres ideology'🌺...

The idea that women belonged in the home and that men belonged in public spaces. There was an idea that allowing women into the public sphere was to be risky because, given their 🥀“weakness”🥀, they could become contaminated by the vile influence of men.

(
Aside: Gotta love that phrase —

THE VILE INFLUENCE OF MEN 👹

...but really, that's how Gender Criticals sound when they talk about how trans women are ACTUALLY MEN who are of course pretty reliably DANGEROUS AND VIOLENT.
...and therefore so are trans women, QED.😝
But I digress.
)

This theory resulted in:

...which is ultimately how we get to gendered bathrooms.

To be clear: Gender Criticals are anti feminist, no matter how they self-identify. When was the last time someone made a "safety" argument for separatism that actually benefited the group being separated? Even just staying with the bathroom issue:

...and this is just one example of that.

So there's that article (and some accompanying short videos). I stashed it away for future reference, thinking "well... that argument has been dealt with *so* thoroughly by now, the GCs will probably stay away from mentioning restrooms, so [shrug]."

...and then I check Twitter, and see @ripx4nutmeg's tweet, and Wendy's comment "This is why we flip out about locker rooms, etc. How can you tell the difference between the innocent and the abusers?" which is basically the racial profiling argument, but with genitalia.

(Actually secondary physical cues serving as a proxy for genitalia, but I think we all understand that by now? Not even GCs are proposing crotch-checks as a prereq for restroom entry... so far...)

So, you know, Gender Critical Twitter didn't disappoint. There's no argument against trans people that's so hopelessly bad that they won't bring it out if it can be given a fresh coat of paint with a current news article.

This is rather at odds with what other Gender Criticals have said on the matter -- i.e. basically if you're born with a penis, you're a man, and if there's any ambiguity then it's up to a doctor to "observe" what you are. Maybe you can be male without a penis, but you can't be female without a uterus? And doctors can issue false femininity but not false masculinity?

This is someone who was assigned female at birth[1], and whose sex is only being called into question because of scientific tests (testosterone levels and presumably some kind of internal scan), at least one of which was performed without consent.

So the rule is "if there's any doubt, then you're a man"? Apparently some people will listen to the science only where it goes along with this principle.

But not all cis females have periods, either, so that isn't a defining characteristic – much less a criterion for exclusion from the category.

Why does anyone still think it's significant to say this?

Or are they just trying to tick off people who actually understand the issues and are tired of fighting with willful ignorance?

Bravely Standing Up for the Lies

20:12 @christophelston “I ❤️ JK Rowling, so I got this swanky billboard in Vancouver. / JK, thank you for standing up for women and children. You are an inspiration.” 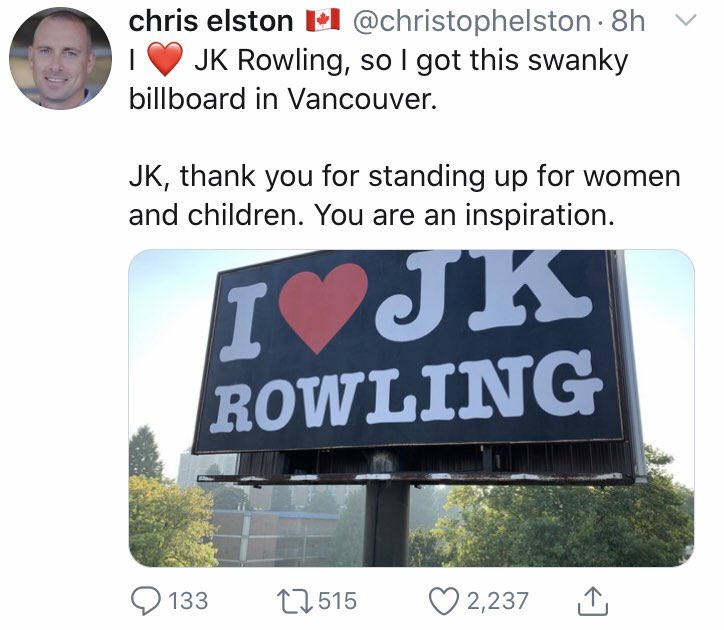 They've just latched onto this idea that JKR's

false advocacy is helping women and girls, when it's carefully attacking an

Maybe they know that, but they pretend not to.

more about the billboard

Harry Potter and the Hashtag of Horror

Sadly, knowing who is promoting this, Irreversible Damage: The Transgender Craze Seducing Our Daughters is probably full of misrepresentations. Research in progress.

If there were a local TRA branch, I'd be asking them for a job fighting BS on Twitter.

My Terrible Views Are Being Ignored Because I'm Cis

No, Wendy, you're being ignored because your views aren't based on fact and you refuse to confront that.

Also, your views aren't being ignored, unfortunately. I wish they were.

Appeal to "It's a Religion"

Funny, doesn't seem like anyone's stopping them from questioning it or asking where it came from inventing dark origin stories for it. Also, great way to address the substance: "it's a religion, therefore you're wrong!"

Also, they seem to be fine with religion as long as it's "traditional", whatever that means.

At all? Did Ann really mean to say that? That would be, like, unless there's a "trans bathroom", you can't use the loo.

However, the law doesn't seem to back up her conclusion that "trans people do not have a legal right to access single-sex spaces". As far as I can tell, it says the opposite: they may not be denied access or harassed, regardless of the provider's religion or sexual orientation, except for certain practical reasons as given in item 738 of the Notes:

Is there actually an argument here? I'm really having to stab wildly in the dark to come up with anything.

There are no good snappy responses to this. It's a partial truth, partly relevant; it employs the

strategic ambiguity of saying little while implying much... and the main thrust of what it implies (that people assigned male at birth will always be psychologically male) is wrong.

...and of course, if any of these accounts happened to be paid trolls, this fear of having their lives destroyed (

imaginary threat) would completely explain the lack of identifying information in their profiles and tweets. ...unless what they really want to "say" is to demean and harass their co-workers, which is what will get people fired. (This is clearly PC run amuck -- what's the world coming to when people in empowered groups decent, normal people can't rightfully put freaks and pervs in their place, amiright.)

Many of them are probably real people who have been convinced by the barrage of anti-trans BS that they need to be afraid to legitimately state their opinions – and perhaps some of those opinions are actually not toxic and misinformed (though the majority do seem to be).

...but I can't imagine that paid trolls aren't taking advantage of this perfect cover to amplify the message.

Sure, Let's Rewrite History Too

Someone's got QAnon envy, apparently. Then again, they're always trying to imply that transgender people are pedophiles, so maybe this comes straight out of the QAnon complex.

Also, I think a lot of trans people would agree that "GenderWasAMistake"; we should just leave gender out of public spaces altogether, and share (rather than segregating them based on a social construct).

That said, receiving death threats doesn't mean you're right; it just means that any movement is going to contain, or be used as cover by, assholes... and if you make people fear for their livelihoods by threatening their rights and inciting hatred of them, you're likely to get some of them lashing out verbally.

This bit of the letter, though --

Rowling has consistently shown herself to be an honourable and compassionate person...

-- is quite untrue. JKR has misrepresented both her own actions and those who oppose them, as well as numerous facts around the issue. These are not the actions of an honourable person.

Any Trans Discussion Must Have a Transphobe for Balance

I keep seeing this issue raised, and I don't have the facts. This is a linkdump for later digging.