From CWRE
< So what‎ | if
Jump to navigation Jump to search 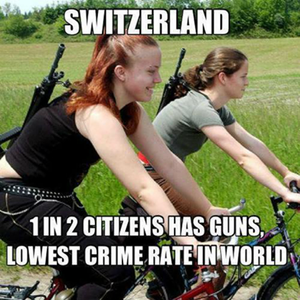 Note that the final line of this meme isn't even true.

Ammophiles often point to Switzerland as proof that a high rate of gun ownership leads to lower rates of gun crime.

"Make your point to the Swiss, who've a higher gun ownership percentage than most of the US. (Statisticians disagree on precise comparison, but the percentage for the Swiss is close to 50%). Yet they have virtually no gun crime."[1]

First, it should be noted that while Swiss gun crime is low in relation to the United States (a trivially easy hurdle), it is quite high relative to most of Europe. The lone exception is Finland, which has a comparable gun-ownership rate.[2]

Second, and more importantly: handguns are regulated far more closely in Switzerland than they are in the United States. In fact, if the US were to adopt Swiss laws regarding gun ownership, most gun-regulation advocates would cheer – and ammophiles would be screaming "totalitarianism" and "big government oppression" at the top of their lungs:

In other words, the Swiss take guns seriously, and take every legal measure to reduce opportunities for abuse (deliberate or accidental).

If there are lessons to be learned from Switzerland, the following points would seem to be among them:

Shortest take-away: If gun advocates want to support Swiss-style gun ownership, pretty much every gun-regulation advocate in the US would be fine with that.