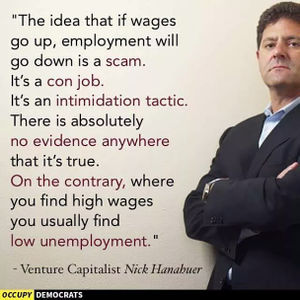 Billionaire Nick Hanauer was one of the original investors in Amazon.com.

There are (at least) two parts to the reality of this myth:

The point of employment as a social institution is twofold:

When a worker's wages fall below the level necessary to provide them with a reasonable living, then this arrangement fails on both counts.

The most pessimistic credible study I could find comes from the Congressional Budget Office, which concluded in February 2014 that increasing the minimum wage would have two primary effects on low-wage workers:

It should be noted that the minimum wage, which (as of 2014) has not been raised or even adjusted for inflation since 2007, is not adequate to keep most workers out of poverty. They therefore rely either on government assistance or on working multiple jobs, which is unhealthy for the worker, increases strain on families, and decreases the job supply.

In other words, a job that doesn't pay enough to live on isn't really worth having.

More significantly, it appears that the CBO model may be too pessimistic:

While there is plenty of debate on this subject, all the real evidence supports one side of it: raising the minimum wage doesn't have any clear effect on the employment rate[2] and in some cases may even increase employment[3].

There is a claim that the Card-Krueger study – which claimed to show an increase in employment after a minimum wage hike – was actually poorly conducted because it relied on employers' verbal statements rather than actually checking the employment records. "payroll records did not corroborate the verbal assertions made by employers."[4] Whether or not that is true, however, a follow-up study confirmed Card and Krueger's findings.[5]