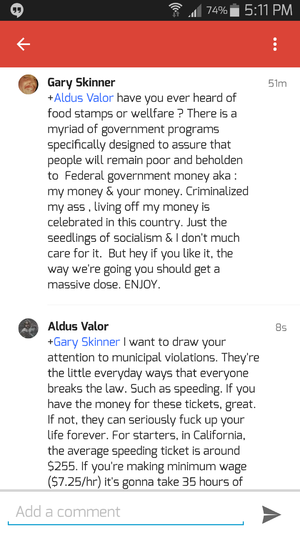 Gary Skinner explains that welfare makes people more dependent, and claims that living off other people's money is celebrated in the US.

Look how people have been deceived into becoming dependent upon the government and having the government telling them that they’re going to take care of them from the cradle to the grave. It has destroyed the American dream, destroyed these people’s lives, they no longer strive to better themselves and to provide for their family." ... "I keep going back to how that destroys the American dream, that destroys the incentive for somebody to better themselves [...] and they become serfs of the government, and that just makes them locked into a slavery relationship with the government."[1]

In the United States it is widely believed that public assistance may have harmful effects on the social and political orientations of those who receive it. Certain kinds of government support – particularly welfare – may foster a ‘culture of dependence’...

There is no evidence that a distinctive 'culture of dependence' has developed among people who rely on financial support from the federal government.[2]

It should be noted that US welfare programs tend to have unemployment and/or extreme poverty a precondition of receiving benefits, where benefits are cut off immediately once the thresholds are exceeded. This does indeed provide a disincentive to be employed or to do at all well financially. Such provisions, however, are invariably demanded by those most strongly arguing against welfare in general (typically Republicans), often citing phenomena caused by those specific features as justification.

(This is consistent with the general Republican tendency to wreck public services and then argue that they should be wrecked further because of how terrible they are.)