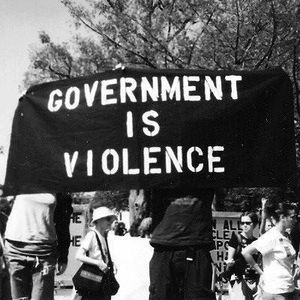 Freedom is slavery, war is peace, ignorance is strength, and government is violence.

"Government is founded upon the initiation of violence." – Tim Rieker, comment on Google+

Government is not inherently violent, however – unless you count the coercive restraint of abusers (a necessary function of any society) as violence.﻿ In this area, selective government-initiated "violence" (constraint) is necessary in order to prevent more widespread violence.

No alternative to government could possibly avoid this kind of violence, since refraining from constraining abusers would allow the abusers to commit their own violence – so this criticism cannot be used to argue against the need for government.

The only logically possible way in which an accusation of violence would be a valid argument against the idea of government, or even against any particular form of government, is to offer a system which is demonstrably less violent in actual practice (rather than just in theory).

This myth comes very close to being a reality inversion, and only escapes due to two facts:

Even so, most governments still prevent more violence than they cause, and eliminating government would only increase the overall level of violence. The only way to decrease violence overall is to improve government.