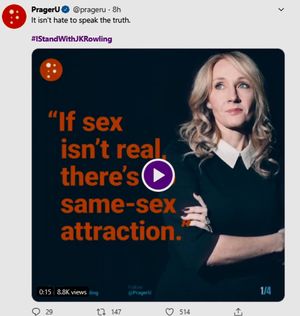 Gender criticals often imply, as if it was an unquestioned fact, that trans activists don't believe in sex.

Trans activists have never denied that sex is real and important. This is a

overgeneralization; it also appears to have some built-in

strategic ambiguity. This false claim is often then used as a means of heaping scorn on trans people for labeling something as "hate" when it is obviously true, which they didn't do. Using false information about a group as a rallying-cry for heaping scorn upon that group is a form of

The trans position on sex as a biological attribute typically includes:

Condensing those statements down to "sex doesn't exist" is clearly an overgeneralization from the actual points that "there are exceptions" and "it isn't everything" straight through "it isn't important at all" to "it doesn't exist", without stopping.

In many discussions around this claim, regressive arguers are clearly using "sex" to mean "reproduction", when it was the other meaning – the gender of biology[1] – which was under discussion. (Apparently they also don't like the phrase "the gender of biology"; the likely explanation for this is that it's much too unambiguous.)