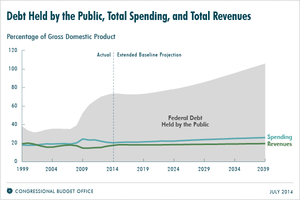 The debt exploded as Bush left office in order to aid recovery from the Great Recession. Due to a successful recovery, it is expected to actually recede a little by 2017 and then start edging upwards again – with deficits between 2.5% and 3% of GDP, which is an entirely healthy level.

If you're upset about the size of the deficit, you should be angry at Bush for (among other things) starting two wars while reducing taxes for the rich, and at the Republicans in general for pushing through deregulation of Wall Street in 1999. (No, you can't blame Bill Clinton any more than you can blame Obama.) 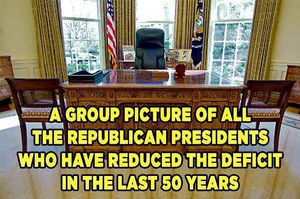 Clinton is the only president to reduce the deficit within the past 50 years. (He wasn't a Republican.)

* closest date for which a figure is available