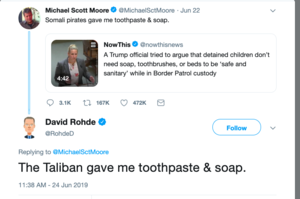 Evidence suggests that Somali pirates and the Taliban treat their prisoners better than the US treats its "detainees". (Michael Scott Moore and David Rohde via Jeet Heer)

At least one of the camps is experiencing conditions of extreme filth:[1]

Children as young as 7 and 8, many of them wearing clothes caked with snot and tears, are caring for infants they’ve just met, the lawyers said. Toddlers without diapers are relieving themselves in their pants. Teenage mothers are wearing clothes stained with breast milk.

Most of the young detainees have not been able to shower or wash their clothes since they arrived at the facility, those who visited said. They have no access to toothbrushes, toothpaste or soap.

Detainees are being treated poorly in numerous other ways:[2]

The Department of Homeland Security’s own inspector general criticized these conditions in a December report that documented the improper housing of detainees in facilities meant for people with criminal records, strip searches that violated standards, abusive behavior by guards, and frequent threats of segregation from the rest of the detainees.

[Report:] "In multiple instances, detainees were disciplined, including being segregated or locked down in their cells, without adequate documentation in the detainee’s file to justify the disciplinary action."

"The inhumane conditions for adults are a result of an administrative use of detention as punitive, deterrent measure." — [Human Rights First report]

A Trump Administration official tried to argue that detained children don’t need soap, toothbrushes, or beds to be ‘safe and sanitary’ while in Border Patrol custody.[3]

Self-identified "conservatives", of course, respond by mocking the messenger.