From CWRE
< Misnomers
Jump to navigation Jump to search 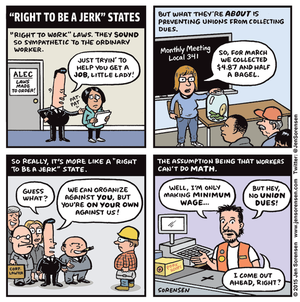 The phrase "right to work" (RtW) generally refers to anti-union laws (aka "right-to-work laws"). They are popular with marketists and other right-wingers.

The implicit claim is that such laws give you more rights rather than taking away your rights. Proponents argue that they give you the right to work without union interference, without having to pay union dues, and without having to "associate" oneself with a union (which they argue is a violation of the right of association).

An actual "right to work" would be something more along the lines of an employment guarantee – a right for any job-seeker to be given a job, preferably at a living wage or higher. The US federal government also uses "right to work" with regard to discrimination against immigrant labor.

What RtW laws actually do is remove protection and negotiating power from the workers, with the implication that this gives the workers a new "right" because now they're free to work without it.

This is the same kind of logic which argues that people aren't free unless they are "free" to sell themselves into slavery.

The same logic could be used, for instance, to argue against workplace safety laws -- since the removal of such laws would probably result in more jobs, giving individuals the "freedom" to choose to risk their life or health in an unsafe workplace. In the current climate of job scarcity, many people would feel economically compelled to take such jobs despite not really wanting to take them. The idea that the removal of such restrictions bestows any sort of "freedom" or "right" is therefore ludicrous.

Someone said that right-to-work laws have the advantage (from the worker's POV) that they also ban non-compete clauses, but this does not seem to be true; the only RtW states that also restrict non-compete clauses are Florida (very little restriction) and Texas.