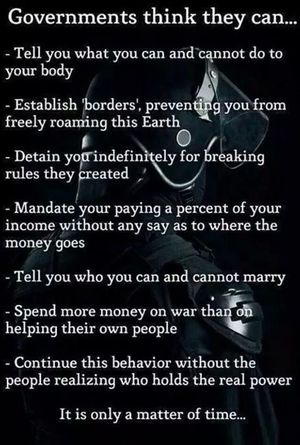 some problematic things that governments do

Anti-governmentism refers to any ideology whose central tenets include opposition to the idea of government. This can be as mild as opposing government regulation of business or government-provided safety-nets, or as extreme as advocating the complete abolishment of all governments.

governments are always more powerful than private entities the problem is governments can only steal wealth not create it, so they always end up eing influenced by those in the most politically connected corporations... the solution is to level the playing field by removing government power so no one can buy, influence or use it legitimately﻿

...government imposes unfairness by means of violence, where banks & corporations have powers private citizens dont & go unpunished for violating peoples lives & property... where the tax payers are forced to fund wars, victimless laws & bail outs they dont want... theres nothing fair about the state as it grants itself the right to use aggressive violence to force everyone to fund & obey it, where aggressive/violent criminals who do the same are jailed or killed by the state

the state is authoritarian, aggressive & hypocritical﻿

government/rulers have never worked for the people nor can they... once you give government the power to define what banks & corporations are & give them access to the government unequal rights (the right to force people to pay for things or obey victimless laws/regulations) those banks/corporations are bound to keep wanting more of the states power...

These arguments are kind of like saying "here's a chainsaw, but you should never use it because lots of people are killed by chainsaws every year. You should never oil it or put gas in it, either; it's evil and you should just stay away from it. And If some lunatic picks it up and starts cutting down all the trees in your backyard or trying to kill you with it, that's the chainsaw's fault -- and it's your fault for buying a chainsaw in the first place. Don't you know how many people those things kill every year?", and sometimes "Why are you trusting that chainsaw with your life? If you think the chainsaw cares about you, you're just a naive sheep."[1]