The way ND handles moderation is absolutely infuriating. I've now been suspended for a third time. I only know what ND dubiously claimed I did wrong the first time because I specifically emailed them to ask — and there are indications that that they don't like people talking openly on Nextdoor about their manifest moderation issues.

So let's talk openly here about moderation issues on Nextdoor. 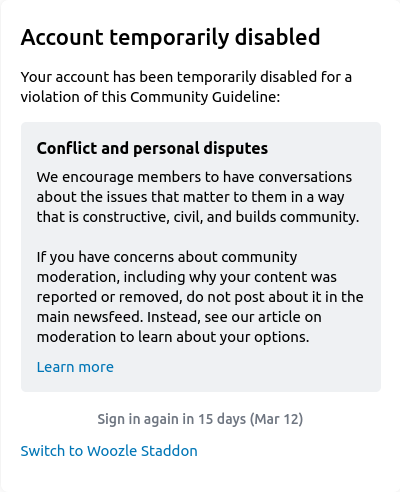 The screenshot on the right is the only notification I received that I had been suspended; there was no email. I went to the "learn more" link[1], read the article as carefully as I could... and remain unenlightened as to what the problem was.

Aside from the vague hint in the notice itself — «If you have concerns about community moderation, including why your content was reported or removed, do not post about it in the main newsfeed.» — I have no idea why I've been suspended.

So I don't actually know what I was suspended for. I may have to try some tests.

If it is about discussing moderation in a public thread, though: users need to be able to talk about moderation openly, in order to prevent bullying and disinformation-spreading by people who know how to do it without breaking the rules... and ND needs to be clear about which venues are acceptable for discussion (the guidelines as I understand them only say not to discuss it on the main newsfeed, which I did not).

There have been similar problems with posts and comments (not just mine!) being removed — there's never any explanation given at the time as to what the problem was. Sometimes emailing ND Support will evoke some information, but too often these inquiries are left unresponded.