This is a crosspost from Nextdoor. 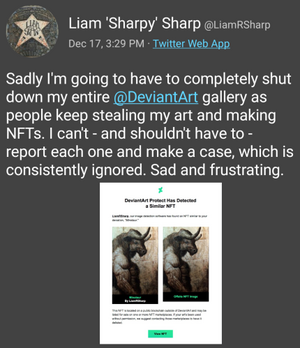 A big part of the problem with #NFTs, apparently, is the fact that their market value rests almost entirely in the misperceptions of a relatively small number of people.

A lot of buyers don't care whether the seller actually has the right to sell what is being sold, much less whether the purchase actually gives the buyer any rights either. A lot of NFT buyers apparently think that buying an NFT (which does not contain any image data, and merely points to an image somewhere on the web) gives them the right to stop others from downloading the same image (pro tip: it doesn't).

To be clear: an NFT without an accompanying legal contract is utterly worthless, even for its aesthetic value -- because you can have that without buying the NFT, and the NFT doesn't contain it.

A lot of buyers may even be perfectly aware that what they're buying is absolutely worthless, but they know other buyers will mistakenly perceive value in the item, and that drives up the market value -- often into the millions of dollars -- for, let me emphasize again, something that is utterly worthless.

This, it seems to me, is also how authoritarian ideas propagate within the memeosphere: it's not that they work or are even credible to *most* people, but *enough* people will fall for them that they acquire value for right-wing politicians and pundits -- who then nurture those ideas in public discourse and give them plausibility.

Other people who normally would have dismissed those ideas then give them credence, because "where there's smoke there's fire": a lot of other people are saying a thing like it's true, so there must be something to it, right?

...and if other people dismiss those ideas out of hand, then clearly they're part of a conspiracy to cover up those ideas... you can see where this goes.

We need to cultivate some new cultural mores around informational responsibility, if we're going to survive as a civilization.