This is a crosspost from Nextdoor.

From over a decade of researching global warming and global warming denialism, I kinda knew this was what's been going on -- but it's helpful to have confirming evidence.

It still sucks that people would do this -- i.e. promote economically devastating policy for the sake of their own short-term profits -- but maybe in another decade or two, the last of the denialist talking-points mentioned here will no longer have a market and they'll move on to denying something else important, like a deadly global pandemic... owait.

In response to a comment that the Great Barrier Reef had "healed itself", I wrote the following:

Here's the most recent information I was able to find quickly: https://www.bbc.com/news/world-australia-54533971

The Conservapedia[u] article on the GBR claims that "Contrary to what many environmentalists have claimed, scientists have found that the Barrier Reef is not dying." and links to a Breitbart[u] article which quotes a 2017 article in abc.net.au, but the URL given is wrong; the correct URL -- https://www.abc.net.au/news/2017-09-29/coral-regeneration-raises-hopes-for-great-barrier-reef-recovery/9001518 -- contains the section quoted in Breitbart.

It appears that bleaching is still happening -- https://www.abc.net.au/news/2021-11-05/great-barrier-reef-coral-bleaching-study/100592796 (Nov 5) but there definitely seems to be *some* recovery -- https://www.abc.net.au/news/2021-11-24/coral-spawn-great-barrier-reef/100645572 (Nov. 23). Marine biologist Gareth Philips: "This spawning event is another sign that the reef is recovering, it is not all doom and gloom for the reef, it is looking amazing and it is very encouraging to see it bouncing back."

(Neither Conservapedia nor Breitbart can justify their claims based on the evidence presented, nor even the additional positive indications I found.)

There was some discussion around the finding that support for GW denialist claims 1-3 was declining. I agreed that this was what the study had found, and dug up some specifics: 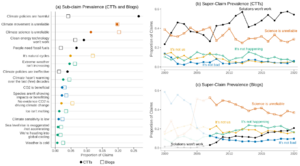 chart from page 4 of the study

The transcript of RW's video:

Note, however (see chart) that they're not declining by much, and they were already far below the other claims in popularity. ("CTT" = conservative think-tank(s))