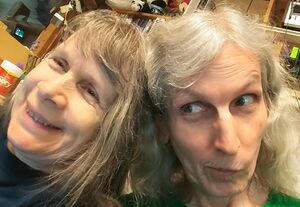 I'm trans, so I thought I should be visible today. Hi! I'm the one on the right. The other one is my partner Sandy.

(I would have posted this earlier, but today's Trans Agenda™ was pretty packed. The imperialist patriarchy's not gonna dismantle *itself*, ya know...)

I'm specifically posting this here because it's the most "conservative" group I'm in, of all the social networks I'm on, so I figured this is the place where my visibility can do the most good.

As I was trying to take this selfie, I kept imagining the things that people here might say or think about me, about us. I've certainly seen those things said elsewhere about others, and even sometimes about me. I won't repeat them here; honestly, it doesn't take a lot of imagination or cleverness to make fun of transness. We make excellent targets for the verbally unskilled... and the politically inept, who want to direct attention away from their ineptitude.

They must be feeling pretty inept and insecure, given how furiously they're trying to get people not to look behind the curtain. Did I say the imperialist patriarchy's not gonna dismantle itself? Maybe it's falling apart as we speak, and these are its dying gasps... https://en.wikipedia.org/wiki/Extinction_burst

We're not the *only* targets, of course... but if being among the oppressed means I can more meaningfully stand together with other oppressed groups -- other women, other LGBTQ+ people, nonwhite people, poor and homeless people, non-majority-religion people -- then that seems like a plus.

Now, if we could only get to a Trans Day of Being Allowed to Just Get On With Our Lives...