From CWRE
< Transnegation Roundup
Jump to navigation Jump to search 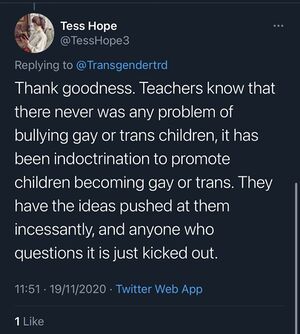 Really. When we deny reality, people look at us like we're denying reality. So unfair.

You've got to be kidding.

I Love Hate, Hate Is Great

No Trans People Murdered in UK in 2020, so Just Ignore All the Harassment and Threats

So, you know, we should just ignore the fact that transphobic hate crime reports have quadrupled over the past five years in the UK. It's fine.

This source says the number for women+girls is actually 241: Homicide in England and Wales: year ending March 2019 -- so the above calculations need to be revised a bit, and we probably end up at about 1 per year -- roughly the same as women+girls.

Transitioning Is Part of the Corporate Transhumanist Agenda, Apparently

Transgenderism and surrogacy are both products of what @jbportraits has identified as a corporate agenda “to colonise our sexed bodies.” The links between them are extensive. Both offer lucrative market opportunities for Big Pharma and private healthcare.

These market opportunities are linked. Trans adults made infertile by cross-sex hormones and genital surgery will have absorbed the belief that bodies are there to be manipulated. This, and an attitude of entitlement, will boost the demand for surrogacy.

Both transgenderism and surrogacy need legal changes to facilitate their development. Both piggy back on progressive causes like equal marriage to achieve these changes - eg trans self-declaration in 2015 Ireland, and surrogacy law in 2020 Argentina.

Both transgenderism and surrogacy require body dissociation, and use reductionist language to objectify women (“menstruators”, “gestational carriers”). This reductionism is an essential building block for the transhumanist project to ‘improve’ human bodies.

Pursuit of the transhumanist vision depends on the development of techniques which can manipulate body parts and genes to fashion new bodies. Transgender clinics and surrogacy clinics are laboratories where those techniques are being pioneered.

Give me a break.

Apparently "surrogacy" refers to surrogate motherhood. Based on subsequent discussion in that thread, the problem with this is not so much the existence of surrogacy, or even of paying for it, but the existence of a sense of entitlement around it -- "feeling entitled to rent a woman's womb to produce 'their' child". it's possible that this is a thing, though I haven't heard of it being a widespread problem. To the extent that it is, I could certainly see it being the product of kyriarchal/corporate propaganda -- but as with the claims about trans people, no sources are offered for this.