Control of knowledge is control of action 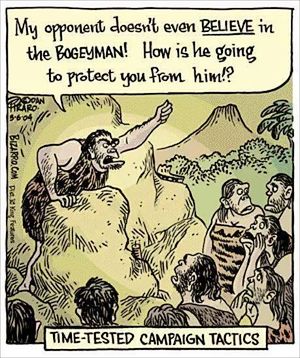 People who believe in the bogeyman will find this argument credible.

Someone who believes, for example, that X is a deadly threat is likely to strongly prefer a candidate who offers any plan (however dubious) for stopping that threat over any other candidates who focus on other things. If the reality that X is not actually a problem but Y and Z are, then a lot of people may end up voting against solving those real problems in favor of solving the imaginary one. 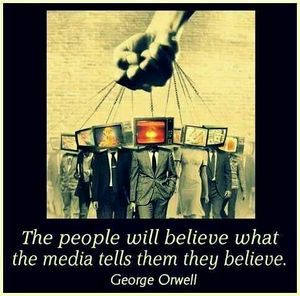 The mass media controls what most people know.

Another way to control the decisions someone makes is to present them with a limited range of choices (all of which are acceptable to the controller). This is especially effective when they can be surrounded by others – whether in person or via mass media – agreeing that those are the only possible answers, and preventing or shutting down discussion of any others. If someone is not aware that there are other options, they will tend to choose from among those presented – giving them the illusion of having a choice while allowing the controller to prevent unwanted outcomes.

"The smart way to keep people passive and obedient is to strictly limit the spectrum of acceptable opinion, but allow very lively debate within that spectrum."

Relatedly, an issue may be described in terms favorable to the controller's wishes, ignoring other aspects that might lead to a different preference. Engineered popular ignorance of certain details of an issue therefore leads to control of popular opinion on that issue.

You can also prevent such believers from having meaningful dialogue with others who do have an accurate understanding of reality. Imagine trying to have a sensible discussion with someone who argued thusly:

My esteemed opponent advocates for increased usage of solar panels as a source of energy for our great nation -- but is she not aware that the suction of light-energy from these panels tires out the horses that daily pull the sun across the sky's firmament? Worse yet, it is well-known that the glare from these panels may cause the horses to panic and rear up in their tracks, risking unimaginable disaster to all life on earth! Clearly my opponent has not considered these, the scientific facts in the matter, or else is so bounden by her financial ties to the multi-million-dollar solar panel industry that she would eagerly sacrifice us all to the inferno of her ambitions! 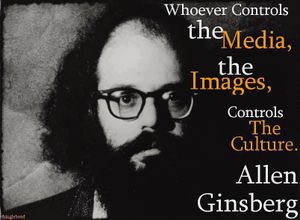 ...and whoever controls the culture controls what people will fight for.

Nobody today would actually hold such beliefs, but they are no more in touch with reality than many arguments repeated frequently in public discourse.

There is simply no common ground for discussing the nature of reality with those who believe such things because their beliefs are based on (incorrect) received knowledge rather than objective evidence, and they are generally strongly averse to any suggestion of personally reconsidering those beliefs for any reason. 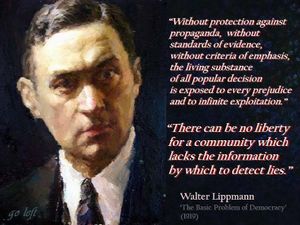 "There can be no liberty for a community which lacks the information to detect lies."


The conscious and intelligent manipulation of the organized habits and opinions of the masses is an important element in democratic society.