The current US federal debt is at a record high which is highly unusual and entirely the fault of President Obama and/or liberal policies.

This is essentially a meaningless statement as long as there remains a deficit rather than a surplus, which has been the case almost continuously since Ronald Reagan first exploded the national debt in the early 1980s. A "deficit", by definition, means that the debt is higher than before; as long as there is always a deficit, then the debt each year will always be at a "record high".

While it's probably not a good thing for the debt to be so high, with no likelihood of reduction anytime in the forecastable future, the blame for it is being completely (and no doubt deliberately) misplaced. If anyone should be blamed for starting this trend, it would be Reagan – although Bush II was clearly borrowing from Reagan's playbook. 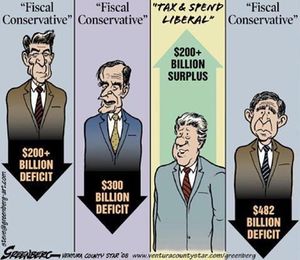 The one brief pause in this trend was the surplus during Bill Clinton's administration, which is just one of many data points adding to the conclusion that liberal policies are fiscally conservative and Democrats manage money better than Republicans. The primary reason for this is that Republicans and conservatrolls refuse to raise taxes -- especially on the rich -- in order to pay for their various pet projects (mainly wars and tax cuts for the rich).

Unfortunately, the Clinton surplus was not large enough or long-lived enough to significantly reduce the deficit, and the national debt resumed its climb to new "record highs" as soon as George W. Bush took office.