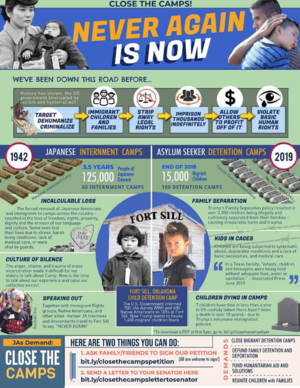 In response to a 2019-06-18 Tweet by US Representative Alexandria Ocasio-Cortez (aka "AOC") which stated that "This administration has established concentration camps on the southern border of the United States for immigrants, where they are being brutalized with dehumanizing conditions and dying.", Republicans repeatedly claimed that the claim of "concentration camps" was inaccurate and historically ignorant:

The Republican logic, to the extent that logic plays a role, seems to rest on conflation of concentration camps with death camps (sometimes euphemistically referred to as "extermination camps"). Concentration camps were not always death camps. The definition of concentration camp is, in part, "a place where large numbers of people (such as prisoners of war, political prisoners, refugees, or the members of an ethnic or religious minority) are detained or confined under armed guard"[5] or "a guarded compound for the detention or imprisonment of aliens, members of ethnic minorities, political opponents, etc."[6]. The US's ICE detention camps opened in 2019 and the WWII Japanese internment camps fit both of these definitions.

The comparison to German concentration camps in WWII is especially apt, as Hitler's creation of those camps was apparently inspired by US treatment of Native Americans.[7]